You may ask how do tower fans work? Here we go through exactly what a Tower Fan is, how they work and why they work so well.

Tower fans, also known as an Upright Fan, are an efficient way to circulate cool air in your home or office. Any high-quality fan of this type is more efficient at cooling large open spaces compared to the swamp cooler or air conditioner. Many of the modern fans are designed to operate quietly and are a perfect fit in a relaxing, noise-free environment. Plus, the tower fan has a sleek, compact form to make it possible to position in a corner or other out-of-the-way space.

What is the Best Tower Fan to Buy? Here’s a List of the Best Selling Tower Fans This Year!

Basic features of the Tower Fan

A high-quality tower fan is built with plenty of practical and convenient features to make sure it works well in the home or office. Here are several of the basic features included:

A fan with variable speeds with a choice of 2-5 settings makes it possible to customize the cooling experience to match the specific preference.

For convenient operation of the tower fan, the ability to use a remote control means it isn’t necessary to get up every time you wish to speed up, slow down, or shut off the fan.

The oscillation feature is a practical addition for its ability to direct cool air in a wider arc to increase the efficiency of this unit in the larger spaces.

Certain tower fan units are designed with a control dial to release scent while in operation (can range from low to maximum). Also, if there are no odors to eliminate the scent feature can be turned off while the cooling fan is left running.

The tower fan is easily operated using the electronic controls on top of the unit. These controls include the ability to adjust the scent released, oscillation button, speed control buttons, and the on/off switch.

Many of the latest tower fans on the market are built to provide quiet operation which means it is great for placing in bedrooms at night, in work areas, or other locations that can benefit from a peaceful environment.

A tower fan is operated via an electric motor that helps to spin a cylindrical container that holds the fan’s blades. Usually the blades run the full length (up to 42 inches on certain models) of the fan to help create a reliable breeze. The electric motor on the fan is operated using a manual switch or electric control panel. These fans can also include an oscillation feature to improve the efficiency of disbursing fresh air in a wider arc. 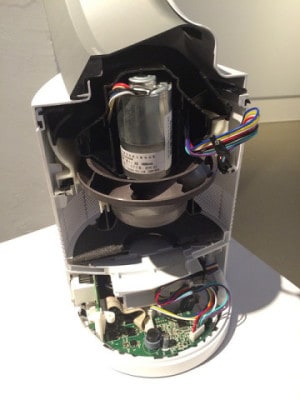 The fan’s blades or impeller blades are designed to rapidly move air through the cylindrical container and then out through the main vents in the outer housing of the tower fan. The impeller blades are built to push the air up and down the container, which is different to the traditional fans (air moves in a horizontal direction). For even and reliable distribution of the air the cylindrical container has multiple outlets and closings for more efficient performance.

The air produced by the tower fan is designed to move in a vertical wave when it escapes from the appliance to deliver the cooing breeze at floor level for the most efficient outcome.

Safe Operation of the Tower Fan

Because of the design of the tower fans with its mostly enclosed casing and vertical build, they are liable to overheat. In general, this issue mainly refers to the older models. Most of the newer fans are more efficient at controlling heat and air movement. The vertical design of the fan means air and heat moves upward in a very compact space and can get trapped. To minimize issues with overheating a high-quality tower fan can come with a special polarized plug (a polarized plug has one large plug that is intended to be plugged into the correct polarity outlet).

Also, for safe operation while in use the tower fan should be placed in a protected and stable position that is clear of open windows and in a location that isn’t likely to be sprayed with moisture. An out-of-the-way space that is clean and dry is certain to provide the best safety performance. 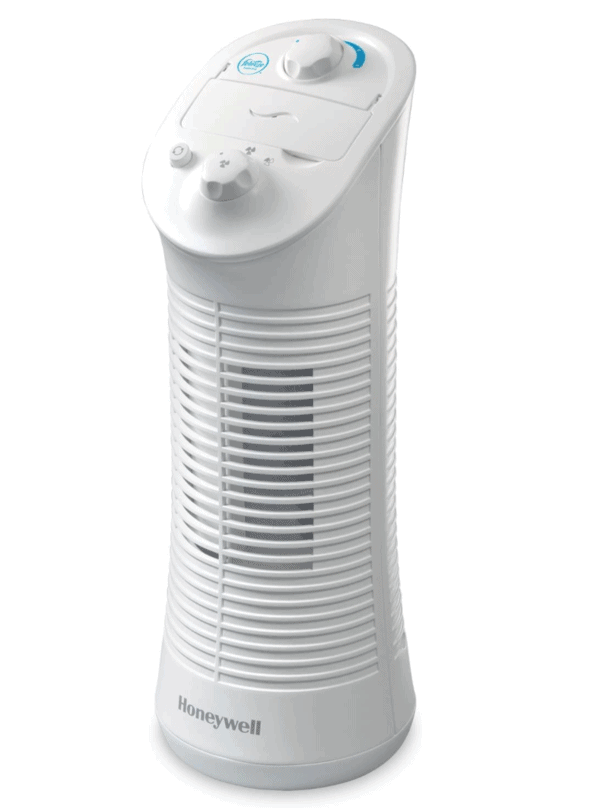 The Honeywell w/Febreze Mini Tower Fan is a dual purpose unit which has the ability to comfortably cool and circulate air in your home, while also fighting odors in the bedroom, kitchen, or other medium-sized rooms. This tower fan with 2-speed fan operation is built to give complete customization because of the ability to set the controls for the fan speed and level of fragrance released. Plus, it is possible to use the tower fan with only the cooling feature in operation without using the Febreze Set & Refresh cartridges. Other features of this Honeywell w/Febreze Mini Tower Fan are its quite operation and oscillation feature.

How do tower fans work when a combined with the welcoming freshness of Febreze? Similar to any other tower fan the Honeywell w/Febreze Mini Tower Fan is simple and straightforward to use. The basic function of the fan is operated using these easy steps:

1 – Start by opening the Set & Refresh scent cartridge compartment which is the large flip up lid on the very top of the unit.

2 – Lift the lid up and insert the preferred scent cartridge. There are many to choose from including: original scent, sky scent, or quiet jasmine. Plus, these cartridges have the potential to last between two to four weeks.

3 – Use the large dial on top of the tower fan to control the amount of Febreze fragrance that is released while the unit is in operation. Other control dials on top of the fan include the on/off button, fan oscillation button, and fan speed control buttons.

4 – Once the Honeywell tower fan is turned on the scent from the cartridge is drawn down into the cylindrical container and released with the cool, fresh air to help neutralize odors throughout the home.

Check Out WhatFans Other Fan Articles & Reviews below –

This site uses Akismet to reduce spam. Learn how your comment data is processed.


Hey there! Thanks for visiting my blog!

My name is Joe and I love home appliances and especially fans. In this blog, I write about my experience with testing and choosing fans for myself as well as for my friends.

Check out About page for more info!

WhatFans.com is a participant in the Amazon.com, Inc. Associates Program, an affiliate advertising program designed to provide a means for sites to earn advertising fees by advertising and linking to Amazon.com.